ReGenerating Champa—Transitioning Identity From Past to Future is a one-day conference in May 2015 that invites many Cham scholars, activists, and artists to UC Davis for panel discussions and presentations on the reGeneration of Champa. By emphasizing reGeneration, our intention is multiple— to center the ideas and cultural productions of the “next generations” of Cham, to revitalize what is remembered about Champa by revisiting the legacy of the kingdom, and to look towards the future. 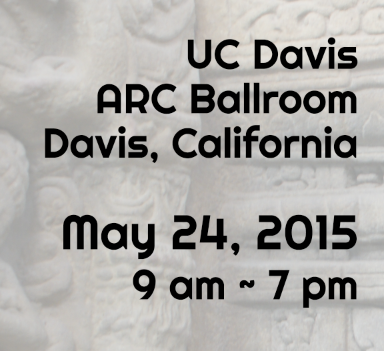 Through plenary panels, live performances, and film screenings, the conference seeks to encourage Cham capacity for activism, historical memory, cultural production, and education, at all ages. Please join an unprecedented opportunity to reGenerate Champa. Open to all Cham generations, nationalities, and faiths, and to anyone with interest. Please register for free at our website. We’ll provide complimentary lunch.

The conference is organized by International Office of Champa (IOC), co-directed by Julie Thi Underhill and Azizah Ahmad, and co-sponsored by Southeast Asians Furthering Education (UC Davis), the Asian American Studies and Native American Studies departments at UC Davis, IOC, the Council for the Social-Cutural Development of Champa, and individual donors.

Save the date for May 24, 2015, and join us at UC Davis for an unprecedented opportunity to ReGenerate Champa. This conference is open to all Cham generations, nationalities, and faiths, and to anyone with interest in the themes of our program. We currently have scheduled−

Who are the Cham?

Considered part of the Malayo-Polynesian subfamily of Austronesian, the Cham are set apart as the only known people in the Austronesian language family with prominence on the mainland rather than on an island. By archaeological and historical record, the Cham are considered indigenous to what’s now mapped as Việt Nam. After establishing their predecessor society over 2,000 years ago, the Cham traded by sea with other Austronesians and with kingdoms of prominence. By river, they traded with indigenous peoples living further inland and in the mountains. Through its abundant commerce and its strategical coastal location, the Cham kingdom was well-known on the maritime silk road between China and India. Champa’s goods were sought out by travelers such as Marco Polo, who visited in the 1200s and influenced later Europeans to do the same.

Today some Cham know the legacy of their longstanding kingdom Champa, the first civilization in Southeast Asia with a written language, and the culture whose ancient temples still stand throughout modern-day south-central Việt Nam. One of the most foremost temple complexes in Southeast Asia, Mỹ Sơn functioned from the 4th to 14th centuries AD as site of religious ceremony and as a burial place for Cham ruling dynasties and national heroes. Now a UNESCO World Heritage Site, Mỹ Sơn is the most continuously occupied archaeological site in Southeast Asia. While maintaining some linkages to their traditional Austronesian practices, through the centuries the Cham adopted elements of Hinduism, Buddhism, and Islam. These adaptations came through commerce and communication with India, most significantly, and with merchants from the Middle East.

In their religious practices today, the Cham in Việt Nam are most strongly affiliated with an “indigenized” or localized version of Hinduism and with two types of Islam, one with more traditional ties to Cham culture, and another that’s more closely aligned with a variation of Islam that’s also practiced in other countries. In neighboring Cambodia, where they are the country’s largest ethnic minority, Cham communities are also quite prominent, especially in the province named after them, Kampong Cham. In Cambodia, the Imam Sann Cham practice a version of Islam maintained since Champa, while most Cham practice a version of Islam originally introduced by trade with Malays. In both Việt Nam and Cambodia, a rich diversity of faiths reveals the complexity and dynamism of Cham communities over time. The ongoing presence of the Cham in Southeast Asia remains a crucial component of the histories, cultures, and diasporas of both Việt Nam and Cambodia.

Although the Cham are indigenous to what’s now known as Việt Nam, during Vietnamese conquest of Champa between 1471 and 1832, some Cham fled perilous conditions, resettling in places like Cambodia, Malaysia, Hainan Island, and Aceh. Then after two thousand years living predominantly on mainland Southeast Asia, some Cham later escaped war and genocide in Việt Nam and Cambodia to live in other countries, beginning in the 1970s. As Cham people transitioned to new homes, their identities were transformed by not only their past but also their future. They came to ask themselves crucial questions about what it means to be Cham. In all, over half a million Cham people alive today face pressures to interpret and define themselves not only for outsiders who often have a limited perspective on the Cham, but also for themselves.

Despite some scholarly accounts that mistakenly relegate the Cham to the dustbin of history, the Cham are not an extinct people disappeared from all maps. As previously mentioned, at least half a million Cham still live in Southeast Asia and in countries of asylum after war and genocide. Many Cham understand that the kingdom of Champa has shaped their identity, in some way. These Cham may even know that there’s been scholarly interest in Champa for over 100 years, as French intellectuals analyzed Cham script, temples, religion, and art during the colonial rule of Indochina. The French also established the first Cham museum in the early 1900s in Tourane (Đà Nẵng), which still stands today. Yet rather than look only to the past or to colonial scholars for a sense of memory or agency, the Cham are rather active in contemporary struggles for human rights in Việt Nam and Cambodia and in processes of self-definition through both traditional artistic practices and new technologies.

All attendees are required to register and fill out a liability waiver from UC Davis. Registration also reserves one free lunch and other refreshments.

You may also visit our Facebook events listing to say you’re attending and to read the latest threads of conversation about the conference, but this will not substitute for official registration.

Email conference co-directors Julie Thi Underhill and Azizah Ahmad, at regeneratingchampa[at]gmail.com, if you have questions or want to show your creative work, donate funding, or volunteer for the conference.